In the Southwest Power Pool (SPP), wind generation makes up a large share of supply and has an outsized effect on pricing outcomes.  When actual wind output materially over-performs the day-ahead forecast, it is typically a bearish factor for real-time prices in SPP.  However, when actual wind output materially under performs the day-ahead forecast, the impact on real-time prices is mixed.  Why?  Because some wind output under-performance is “natural” and some is “man-made”, i.e., caused by curtailment of wind production.  The natural, weather-driven under-performance is due to less

favorable wind conditions than forecasted - these events arise solely from an error in wind forecasting.  The man-made under-performance is due to economic or transmission (reliability-driven) curtailment.

Events in which wind falls significantly below the day-ahead forecast due to curtailments are NOT typically opportunities to buy balance-of-the-day (bal-day) power (they do not reliably result in higher-than expected real-time prices).  Conversely, when wind production underperforms the day-ahead forecast due to less favorable wind conditions, these natural events are typically an opportunity to buy bal-day power.  Thus, to see the true wind signal in the real-time market, it is important to filter out the curtailment noise.

Typical real-time market signal sent when actual wind output is higher than, in-line, and lower than the day-ahead wind forecast 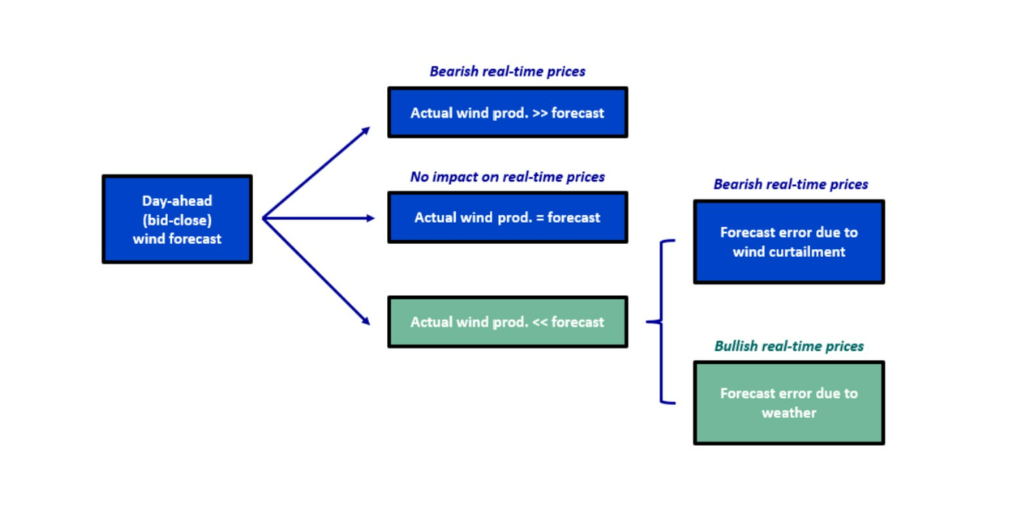 Live Power now covers 79 power plants comprising 40 GW of generating capacity in SPP – 57 of these (16.6 GW) are wind facilities. Live Power 60-second production data can inform trading decisions with real-time generation visibility. We used a combination of Live Power and Yes Energy data to back-test a hypothetical trading strategy founded on our expectation that a large bid-close wind forecast error would often result in higher real-time prices, i.e., a negative DART spread (the bid-close forecast is the wind forecast available when day-ahead bids are due; it is the day-ahead wind forecast utilized in our analysis). We first used Yes Energy data to conduct an historical analysis that led to the development of the conditions for our hypothetical trades. Then, using (what would have been) real-time indicators from Live Power and Yes Energy, we tested our strategy during March, April, and May of this year. The following blog will take you through what we learned and how Live Power data proved to be a highly valuable tool to screen out man-made wind curtailment.

Would you like to learn more about the data used in this analysis?

Our goal was to find a trading strategy that would exploit differentials in SPP day-ahead and real-time prices, based on the real-time bid-close wind forecast error.

First, we used Yes Energy data to conduct an analysis of the day-ahead vs. real-time prices (DART spreads) over the past 12 months. We found the following. 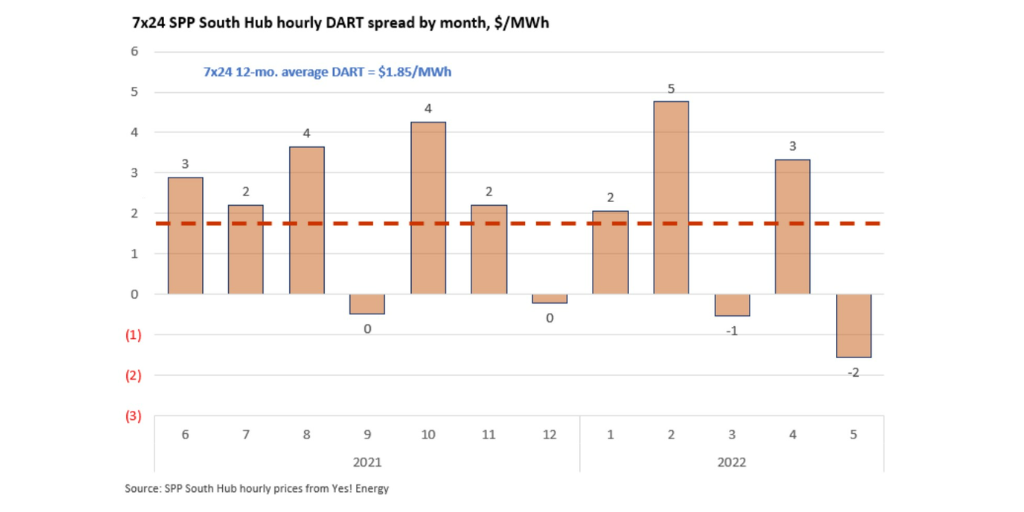 HOWEVER, IN HOURS WHERE ACTUAL WIND OUTPUT IS <90% OF THE DAY-AHEAD FORECAST, THE HOURLY DART SPREAD IS GENERALLY NEGATIVE 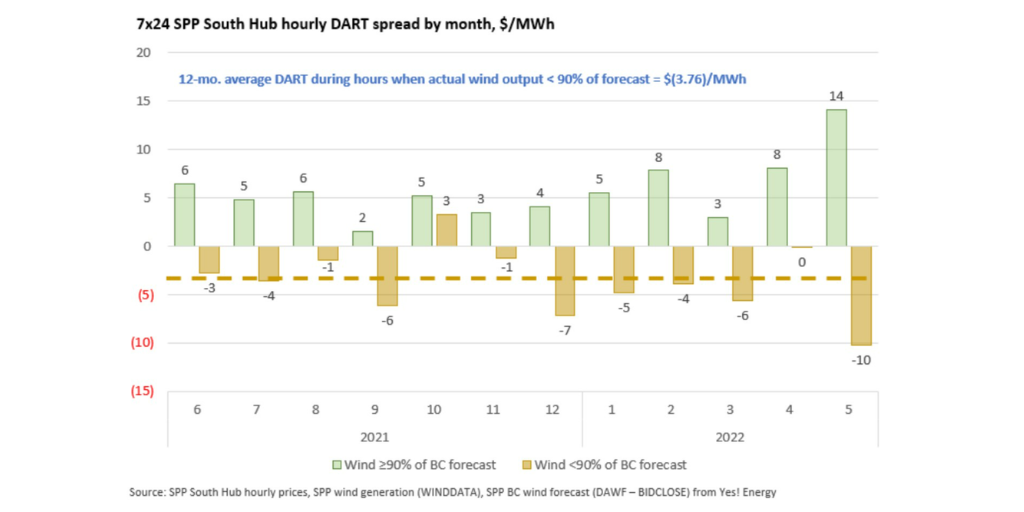 We also observed that while DART spreads were negative during low-wind hours on average, a large wind forecast error does not always indicate a very negative DART spread. Trading on this indicator alone would not be sufficient to generate reliable results.

WHEN WIND OUTPUT IS HIGH AND RT PRICES ARE LOW, SOME WIND PROJECTS WILL CURTAIL OUTPUT – THIS IS NOT CAPTURED IN THE BID-CLOSE FORECAST 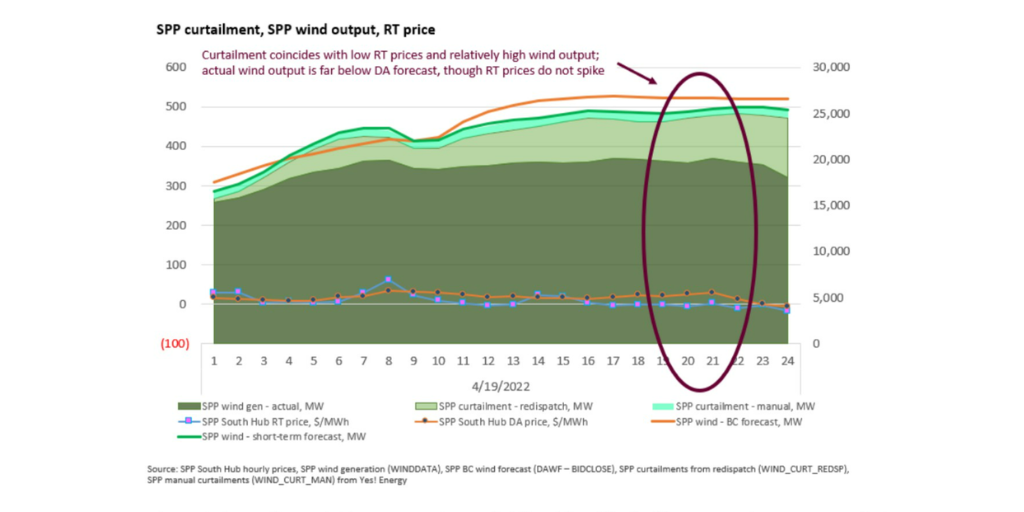 We found two conditions that tend to indicate a largely negative DART spread:

STEP 2: FIND THE DATA TO INDICATE PRESENCE OF THESE CONDITIONS

In real-time, a trader will need access to the most up-to-date information to spot the truly bullish wind signals.

Note: A great way to track the fleet output vs. the forecast in real-time is to look at the new QuickSignals Grid View Dashboards – check out the SPP dashboard page 10 to see fleet production vs. day-ahead and short-term forecasts. Below is a sample from 6/24:

For the second condition, a trader would need to know if there is significant wind curtailment. In SPP, there are three different types of curtailment: manual, redispatch, and economic. Manual curtailments occur through system operator instruction and are induced to maintain system reliability. Redispatch curtailments occur when wind resource offers fail to clear the real-time market.  These types of curtailment reflect the physical limitations of the grid and/or over-supply conditions. Economic curtailment occurs when the price at a wind node falls below the marginal cost of production for the associated facility, when operators voluntarily reduce output to avoid losses on energy production (net of REC revenue).  Wind projects that are no longer eligible for the wind PTC will have a higher marginal cost of production than those facilities that still receive a PTC. Curtailments reflected in data from the SPP ISO (manual and redispatch) likely understate the actual level of total curtailment including the economic sort – particularly when overall wind production is high. 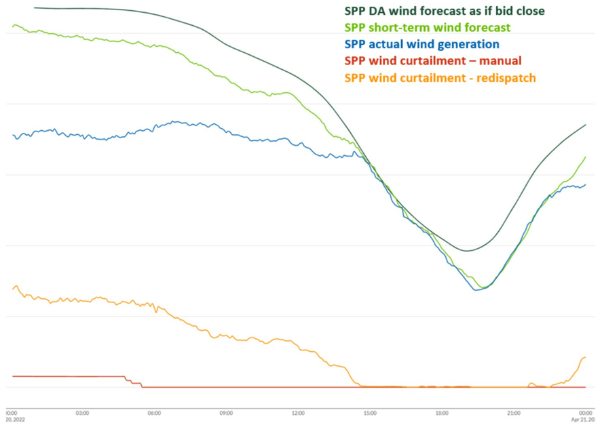 Yes Energy publishes SPP-reported reliability curtailment data the day after the operating interval – it is not available in real-time. This is where Live Power data comes into play – Live Power real-time production and capacity factor data can be used to estimate whether significant curtailment is taking place in SPP.

To utilize real-time Live Power data, we grouped the wind projects covered by Live Power into two groups – those that we expect to economically curtail output (these projects are estimated to no longer have PTC eligibility based on their in-service dates), and those we do not expect to economically curtail output (projects less than 10 years old). Because both reliability-driven and economic curtailment are most likely to occur when wind production is strong, we can reasonably expect that high levels of reliability curtailment will coincide with significant economic curtailment. We then compared the average capacity factor of each group under varying levels of SPP-reported curtailments (both manual and redispatch). 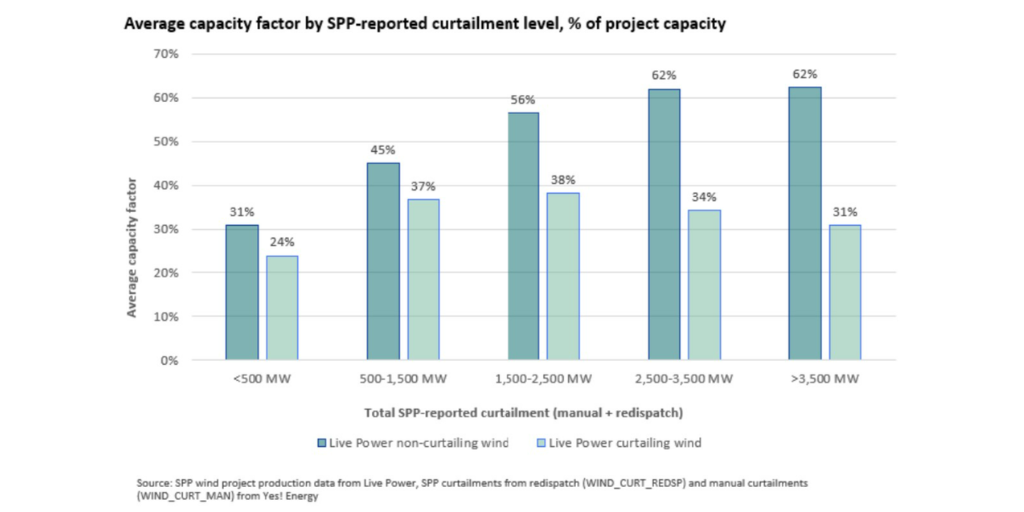 We concluded that there was significant curtailment in SPP when the average capacity factor of the curtailing group was ~20 percentage points below that of the non-curtailing group. 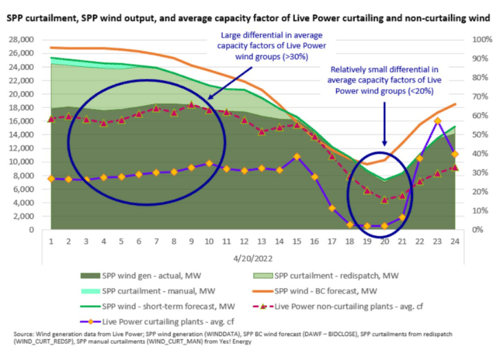 With the Live Power curtailment indicator, we had what we needed to replicate our hypothetical trade.

Note: The new QuickSignals SPP Grid View Dashboard includes a tile covering wind curtailment (SPP page 11) – it shows the RT output vs. nodal prices for a selection of projects that exhibit curtailment. Use this pre-set tile or customize to add more projects or project groupings. Below is a sample from 6/24: 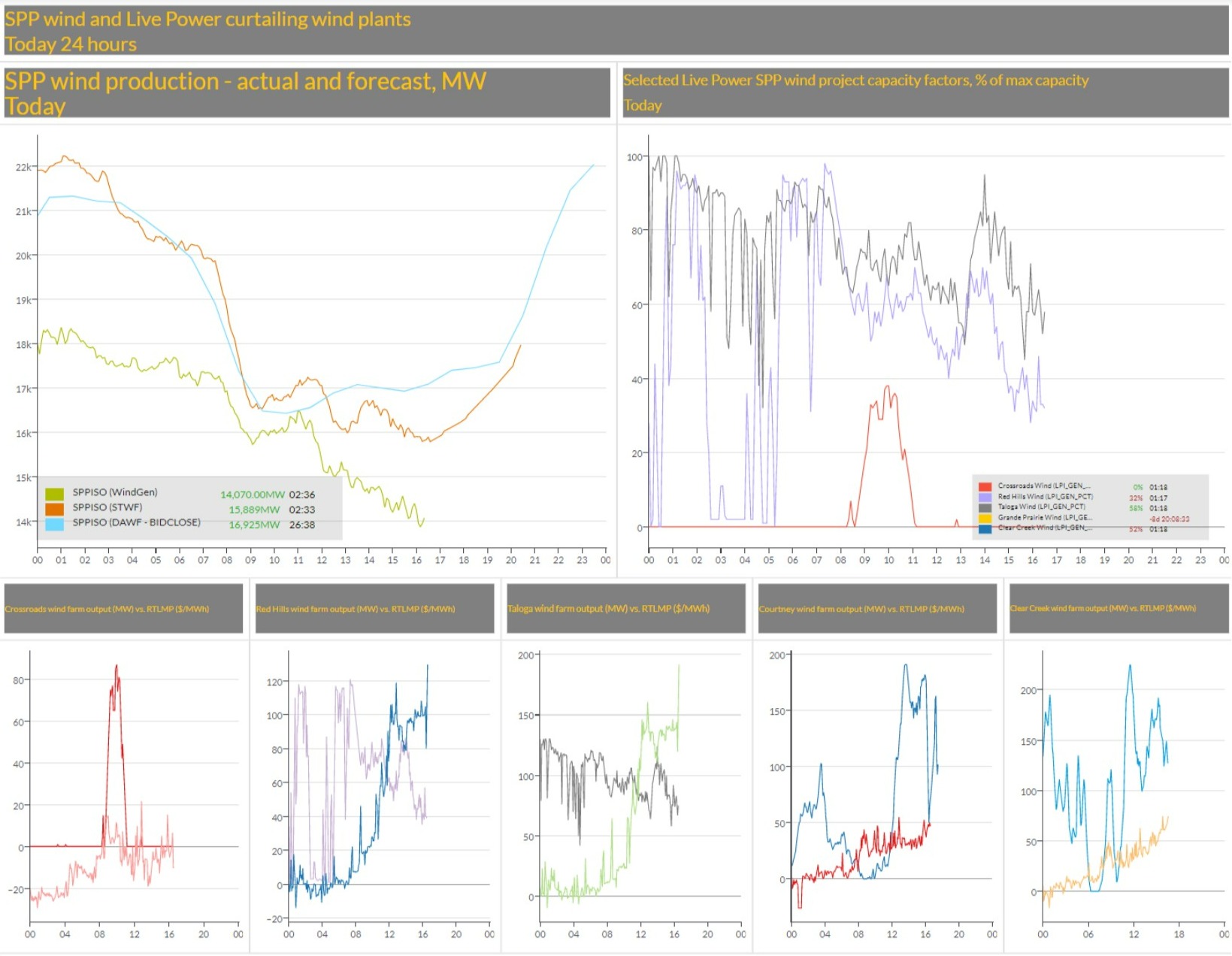 WE DEVELOPED AN HOURLY MODEL FOR MARCH, APRIL, AND MAY OF 2022 THAT INCORPORATED OUR TWO TRADE CONDITIONS

AND THE FOLLOWING STRATEGY

When both conditions no longer held, we took an offsetting bal-day position.

If then in HE 19  the two conditions no longer jointly held, we would then sell 100 MW bal-day at the current price for the remainder of the day, i.e., sell the 5 remaining hours (starting with HE 20).

BASED ON THIS RATIONALE

AND USING A FEW ASSUMPTIONS

THE RESULTS ARE ENCOURAGING

Disclaimer: The above analysis is an illustrative example, and is not to be used or interpreted as trading advice.

Live Power’s generation production data reflects the most up-to-date system conditions and informs real-time decisions. Yes Energy’s comprehensive real-time ISO, weather, FERC, and fuel data complement Live Power series. Together, they can give you the tools to most accurately analyze and act upon real-time supply trends.

Would you like to learn more about the data used in this analysis?